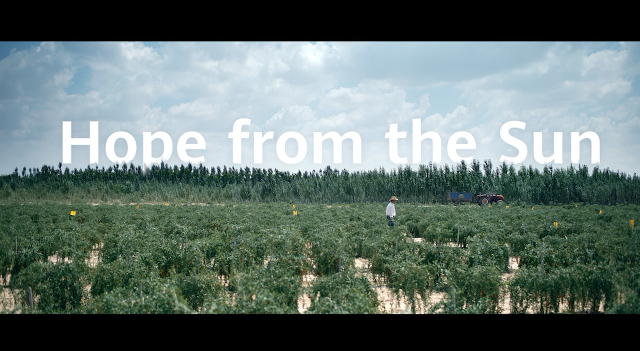 
In October 2018, the United Nations Intergovernmental Panel on Climate Change (IPCC) issued a special report on the impact of global warming at 1.5°C above pre-industrial levels. The report pointed out that, in contrast to a 2°C increase, limiting global warming to 1.5°C wouldn’t just have clear benefits for people and natural ecosystems, but also culminate in a sustainable and fairer society.


The report also emphasized that to limit global warming to 1.5°C, it will be necessary to achieve “rapid and far-reaching” transformations in land, energy, industry, and cities. By 2030, global net anthropogenic carbon dioxide (CO2) emissions must be reduced by about 45 percent compared to 2010 levels, and “net-zero” emissions must be achieved by 2050.


Increasing the use of clean energy, boosting the utilization efficiency of resources and energy, and developing a greener energy infrastructure are fundamental to responding to the energy crisis and climate change.


Huawei and Baofeng Group both take a proactive approach to tackling problems such as energy shortages, pollution, and environmental destruction. With a belief in the power of technology, the partners are responding to the global call for clean and efficient energy systems with practical action.


Historically, Binhe New District on the eastern banks of the Yellow River in Ningxia forms a harsh ecosystem with sweeping deserts. 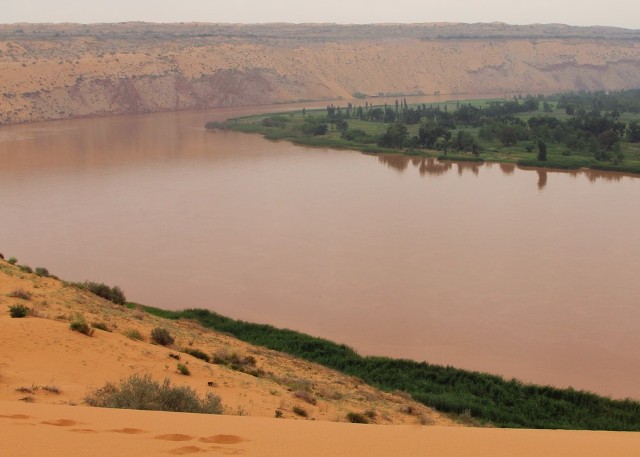 In 2014, Baofeng Group began managing 107 square kilometers of desertified land by planting alfalfa to improve the soil. The company then began planting goji berries, a business that stretches back 1,000 years in Ningxia. Reviving goji farming has also revived an otherwise dead expanse of desert.


To make full use of the land resources bestowed by nature, Huawei Smart PV supported Baofeng Group in building a solar power system over the goji plantation, in effect draping a green blanket over the land. 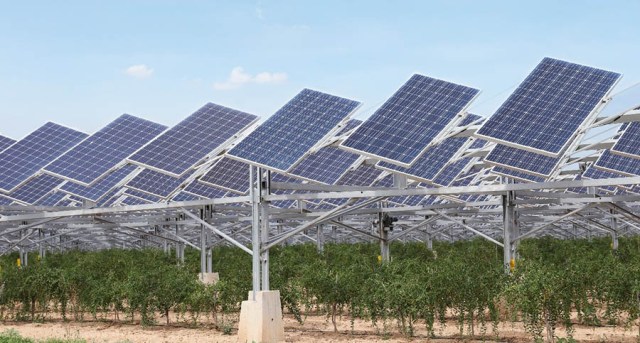 Goji farming and smart PV technology have integrated in perfect harmony, creating a rich layer of “edible rubies” topped by a pristine blue sea of solar cells. It represents a new model of mixed land use involving two complementary industries: agriculture and PV – a model that’s leading the transformation of goji farming and new energy in the Ningxia region.


Under the Sun, a Desert Becomes an Oasis 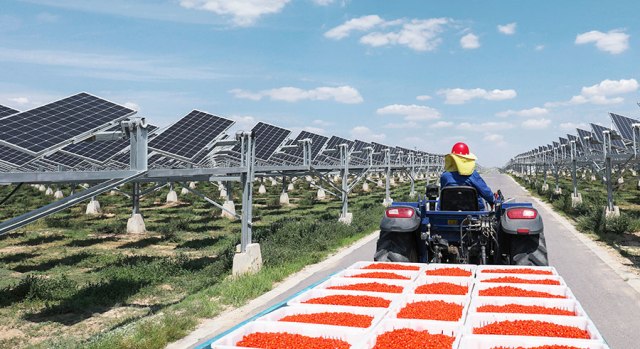 The planned 1 GWp solar power system will cover a total area of 20 square kilometers. The 640 MW PV power plants that have already been constructed are connected to the grid, creating the world’s largest PV power plant with smart tracking.


The Story So Far in Stats


The vegetation coverage is increased by 85%, which significantly improves the regional climate.


Baofeng PV Park has generated 3.875 billion kWh of electricity (*since connected to the grid until July 31 2020), reducing CO2 emissions by 1.841 billion kg, the equivalent of planting 80 million trees. 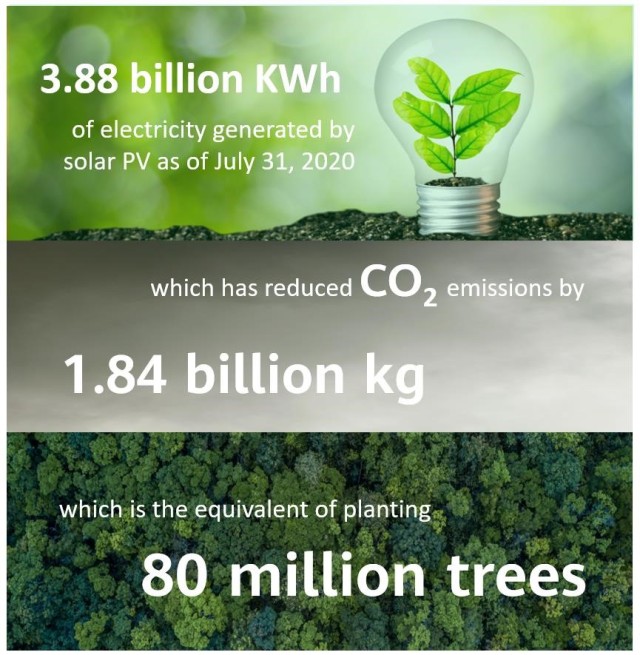 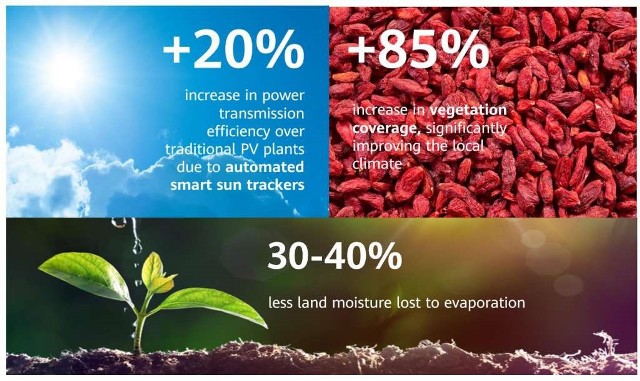 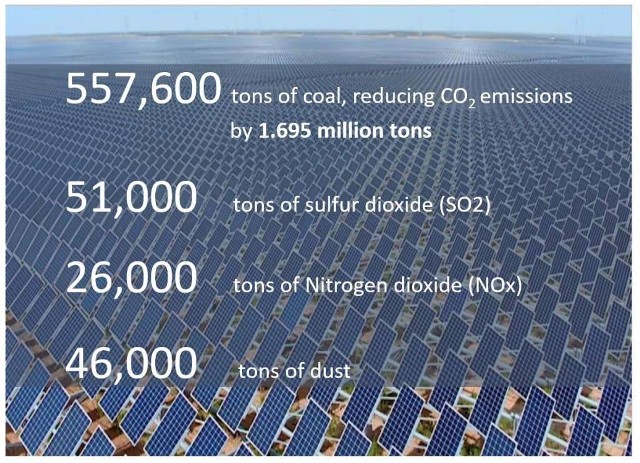 
Although the sun still beats down on this land, the once barren, endless desert has slowly been transformed into an economic blue ocean, representing the future and hope – all thanks to time and advances in technology.


Huawei and Baofeng are leading the transformation of goji farming and new energy in Ningxia, accelerating the development of new technologies, industries, businesses, and models. This new agriculture + PV, multiple land use model isn’t just bringing new life to Ningxia, it’s forging a new ecosystem where humans and nature coexist harmoniously, adding an extra shade of green to the world.

“When I first arrived here, my original vision was to help change the environment. I didn’t expect that the goji-PV project would do that and also benefit farmers in the area.” 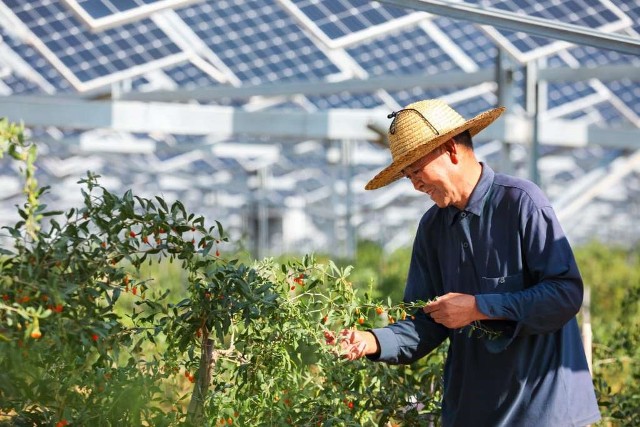 “The land used to be barren, but since we planted goji berries and solar cells, we have work all year round and our lives are much better than before.”


Powering the World with Sunlight


Huawei’s Smart PV solution adopts technology to blanket the desert with greenery and breathe new life into Ningxia. Huawei and Baofeng will continue to use the new agriculture + PV model to generate clean energy and improve the climate of desert regions.


Huawei looks forward to working with more partners globally and taking an active role in reducing reliance on fossil fuels and moving towards renewable energy to help put humanity on the road to resource-saving, environmentally friendly, and low-carbon sustainable development. We will continue to harness the power of technology to develop new practices in response to global climate change and protect the Earth, our home.